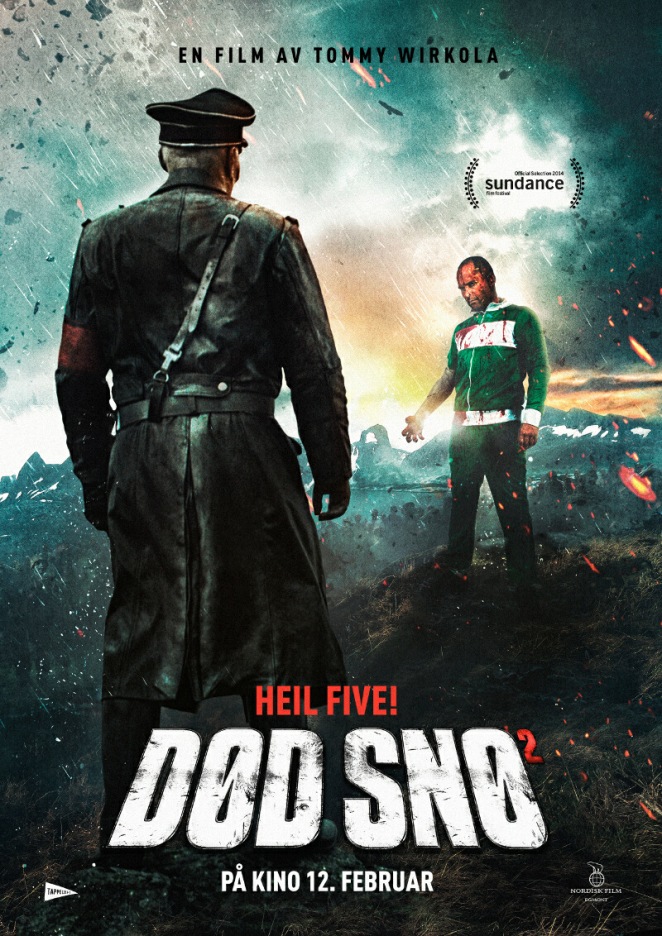 ‘The sequel you did Nazi coming’

They’re back; the Nazi zombies who still want their gold.

Tommy Wirkola returns to direct the sequel to the bat-shit crazy ‘Dead Snow’.

The budget is slightly larger than the last time and so there is literally no time for the audience to wait for the zombies to appear, they are present from very early on which turns out to be a lot of fun.

Starting with a recap of the first film, a la Evil Dead 2, to which this film, and its prequel, owes a great debt. The homages are wonderful, Wirkola takes Ash’s arm idea and runs with it, giving this sequel a great (Captain) hook.

Vegar Hoel reprises his role as Martin, the lone survivor from the original and really goes for it.
It ain’t easy pretending to be loopy and Hoel does a great job of convincing us he is at the brink of madness. Unfortunately, several of the other cast members act as though they are in a b-movie. They are not wrong but it detracts from the piece by being too knowing. The introduction of the Zombie Squad, three Americans who are ‘experts’ comprising of the very funny Martin Starr (Freaks and Geeks/Party Down), Jocelyn DeBoer and Ingrid Haas, is a nice touch, allowing for a multi-lingual cast to show their chops.

Stig Frode Henrickson returns from the original as a new character, Glenn Kenneth, and has a lot of fun with his character, as does Ørjan Gamst returning as the Nazi leader, Colonel Herzog. Hallvard Holmen and Amrita Acharya (Game of Thrones) play the small town police who have to try and deal with the zombie outbreak and have some very funny lines and chemistry. Kristoffer Joner plays the zombie sidekick and the homage to Bub in Day of the Dead is clear in his performace.

The last battle on a playing field has elements of a low budget Lord of the Rings battle but manages to be fun even without the money.

The gore is extreme in a ridiculous comedy style and the story has some fun elements to it, what stops it from becoming a classic is a looseness in the script and story-telling aspect and the shifting tone of the acting. It switches from being a lot of fun to plain ridiculous. Of course, the idea of Nazi zombies is a ridiculous one but one with potential comedic merit, which works well at times and not so much at others.

If you’re a fan of the zombie/horror/comedy style you’ll love this one, but if you love your films with quality control, you may be frustrated.
It must be said, though that this sequel is definitely more Dead than Snow.