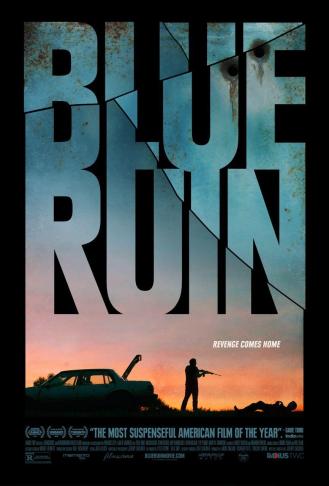 I watched this totally blind, not like with a blindfold or my eyes closed or anything silly like that, but without any previous knowledge of the film. No trailers, no plot, no background, nada, not a clue.
The potential for exciting discovery always exists without pre-conceived knowledge.

Blue Ruin begins interestingly with little dialogue for the first 20 minutes or so as we are introduced to a very bearded homeless, well he lives in his car so not absolutely homeless. A policewoman seeks him out and takes him to the station to deliver some serious news.
Someone has been released from prison…….

And so, the tale of revenge begins. The story unfolds well enough but by the end it begs the question-So? This is by no means a piece of trash. The acting is truthful and the dialogue written well, there is just not enough character connection to care.

Conventional thrillers are made to take the viewer on a journey, hopefully subverting their expectations along the way and entertain them. This wasn’t that entertaining, unfortunately.

Macon Blair plays the lead, Dwight, a man bent on revenge with a nice balance of intent and ineptitude and all the supporting cast do a sturdy job. Maybe the script doesn’t quite allow the viewers in enough.

There are plenty of great thrillers out there and while this one is interesting, it is by no means one of the best. When you compare it to the best kind of revenge films (Oldboy, Dead Man’s Shoes, Point Blank) it pales in comparison.

Director/cinematographer and writer Jeremy Saulnier delivers a moody, atmospheric journey into the dark recess of the human soul but unfortunately leaves the heart at home.

Blue Ruin has won a fair few awards at various festivals around the world. It is different enough for a notice or two but not one I’d recommend.

Some recommendations should come with an advisory sticker. This review is mine. 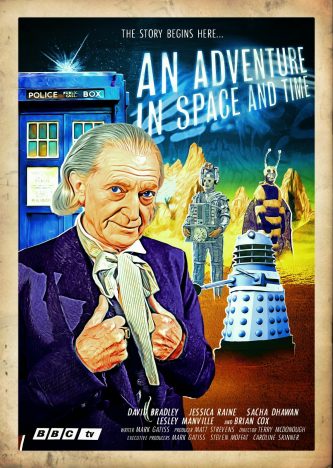 In 1962 Dr Who? was merely an actual legitimate question.

Sydney Newman (Brian Cox), a BBC Executive producer, has an idea for a science-fiction series with a time travelling Doctor as the main character, he then hires his previous assistant, Verity Lambert (Jessica Raine) as the producer on the show, an Indian, Waris Hussein (the great Sacha Dhawan) to direct, they then approach William Hartnell (David Bradley) to play the Doctor and the rest, as they say est histoire.

Innovative and perfect for the BBC, although that wouldn’t be recognised initially, Dr Who has become the BBC’s longest running and most successful drama. This film was made as part of the 50-year anniversary of the original screening of the first episode, which aired on 23rd November 1963.

For half a century, viewers all over the world have been gripped by this, mostly lo-fi, tale of space and time traveller, the goodly Doctor. Many a child will tell you about hiding behind their sofa when the credits came on but they all were drawn to watch the Doctor battling, amongst many others, the Daleks, the Cybermen and the Ice Warriors.

This love letter to the time traveller’s origin story written by the extremely talented Mark Gatiss is more about an ageing actor who is given a role that will ultimately define him, albeit in his later years.
Directed by Terry McDonough (Breaking Bad) he brings to life the courtyard and machinations of the BBC Television Centre at Wood Lane, and beautifully evokes a time with reverence and skill
David Bradley is magnificent, imbuing the character with pomposity and insecurity but also softness and sensitivity. All the cast are enjoyable and help to create this lovely film.
Whether you are into the Doctor or not, this is well written, well acted and well directed.