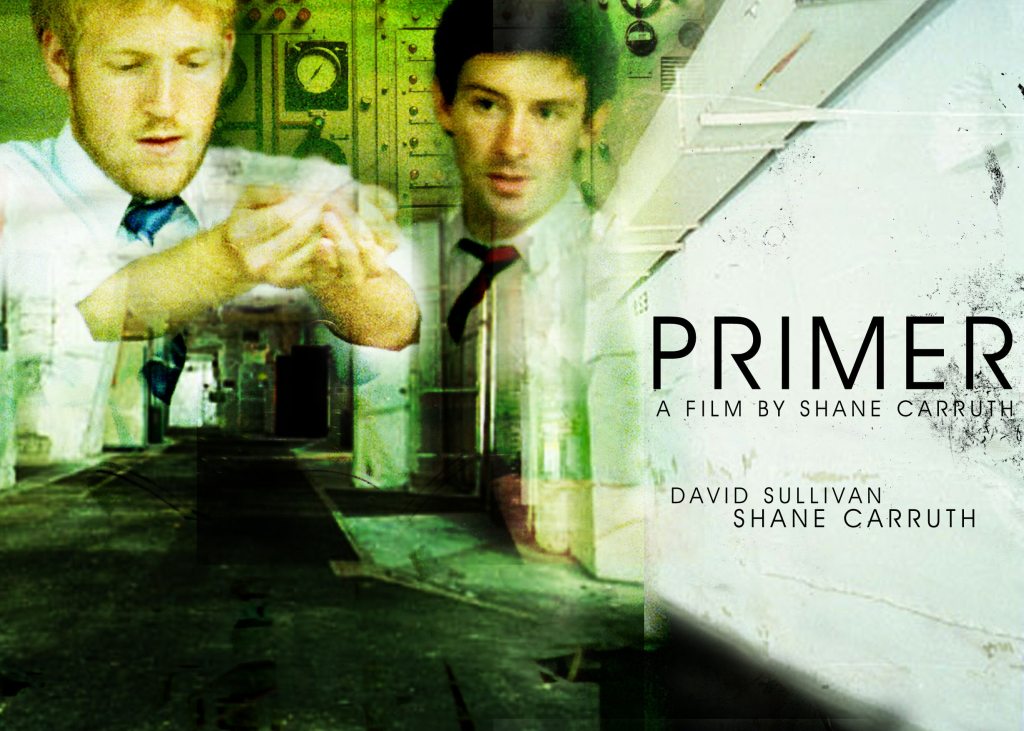 Four friends are working on new inventions in a garage and happen upon something they don’t understand that has far-reaching consequences for two of them.

While being entertaining, there are times when my head hurt from trying to get to grips with the science. If you are well-versed in the details then this will be a joy. It is more entertaining than Inception that was another, less clever head-scratcher at a tiny fraction of the cost, less showy with more substance.

This shows that an interesting script, well thought out and congruent is by far, one of the most important elements of a succesful film. The acting is subtle and comes from a place of truth.

Director, writer and lead actor, Shane Carruth plays Aaron and he creates a labyrinthine story that requires some work from the audience to decipher various clues that rewards the committed viewer. Co-starring David Sullivan who plays Abe, Aaron’s partner in time and Casey Gooden as Robert and Anand Upadhyaya as Phillip as the other two entrepreneurs.

Not quite as enjoyable as Coherence but sharing the same DNA, this film is a welcome addition to the time-travel canon. It reminds me of Pi, in the sense that you know you are watching something of merit but many times feel lost as far as narrative goes.

This film is very well made on a very shoestring budget ($7000) and the scant running time of 77 minutes means that your disorientation will only last for a short period of time .
Full of technical jargon that may confuse and confound its viewers, but ultimately rewards.

A film for the scientists.

Doug Benson, stoner comedian extraordinaire, came up with a joke about Super Size Me, the premise was that if some dude can eat Mickey D’s everyday for 30 days why can’t someone make a film about smoking the sacred ‘erb everyday for 30 days, and so the idea was born and consequently he made the documentary.

As he is a regular smoker, the idea was posited for him to be clean for 30 days then smoke all day everyday for the following 30. This is a doc for people who are already on board with the joys of marijuana and it’s many uses.

I had seen this film a while back and recently discovered one of his podcasts, Getting Doug With High, where he invites comedians and friends into his studio to get ripped, if that sounds like your bag, check it. He also has several other podcasts on the go including douglovesmovies.com.

Throughout the doc, Doug has many medical and memory tests, both during his clean state and then under the influence, and comes up with some interesting conclusions. During the film you get to see clips of his stand up during the 60 days and he is funny, both dry and high.

Filled with appearances backstage with other comics, this gives you an insight into the relatively harmless world of recreational cannabis use.

This is a fun doc with a running time of 94 minutes and if it sounds like fun to you, check it out.