In 2011 this was the least sucky addition to the recent spate of Marvel big screen superfilms but unfortunately it is still missing key elements to elevate it any higher as far as cinema and great storytelling goes.

Everybody was banging on about how good Joss Whedon’s Avengers was and I found it to be an utter yawn-fest, so filled with smoke and mirrors and containing next to no substance at all.
A few well written quips doth not a decent movie make.

These Superhero films should be hugely satisfying; they have a big budget, look amazing, they contain some interesting talent, the potential is huge, then why do they not work?
The contract is always entered into with an open heart and mind.
What doesn’t go amiss is the fact that none of them, thus far, have lived up to their potential.
It is with less and less enthusiasm that I watch these films, but always with a flicker of hope that one day they may deliver.
(The Hellboy movies delivered, BTW)

From the writing of Aaron Sorkin- The West Wing:

“This guy’s walking down the street when he falls in a hole. The walls are so steep he can’t get out.

“A doctor passes by and the guy shouts up, ‘Hey you. Can you help me out?’ The doctor writes a prescription, throws it down in the hole and moves on.

“Then a priest comes along and the guy shouts up, ‘Father, I’m down in this hole can you help me out?’ The priest writes out a prayer, throws it down in the hole and moves on.

“Then a friend walks by, ‘Hey, Joe, it’s me can you help me out?’ And the friend jumps in the hole. Our guy says, ‘Are you stupid? Now we’re both down here.’ The friend says, ‘Yeah, but I’ve been down here before and I know the way out.”

I’m not going to go on about how Hugo Weaving is not really doing anything new, he’s very talented but we have seen it all before. And of course, the montages, the lack of adhering to any part of the Hero’s Journey arc and all in all you have another set of smoky mirrors that nourisheth not. This is an origin story of course, and with that comes all the pitfalls, how to tell the story well, at the same time, make sure all the plot elements are there.

It’s all just a bit of fun really.

Hayley Atwell gives good romantic interest with substance. Toby Jones turns up the volume on sinister with his Marvel supervillain, Dr Arnim Zola. Sebastian Stan, who was very good in the one season, biblically inspired, Kings, is perfectly cast here as Steve Rogers, best friend, Bucky Barnes. Tommy Lee Jones is now the undisputed goto king of gruff. Dominic Cooper does Iron Man’s dad justice. Stanley Tucci is just ace in whatever he’s in and Samuel L Jackson returns as Nick Fury, it has been a while since he has shown anything truly amazing. He was very entertaining in Django Unchained and was interesting in The Sunset Limited but not since Jackie Brown has he really brought some serious acting skills.
The film is not all bad but neither is it all good. It is just too much of an ask of director, Joe Johnston. Yes, it made shed loads of dollar bills but was it a great film?

How to find one’s own way out of the Superhero ditch?
Stop watching them? 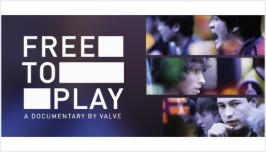 Great stories can be found everywhere.

This documentary about online gamers competing for the biggest prize money pool available of a million dollars entices serious competitors from all over the world, all who have their eyes firmly fixed on the top prize.

The game is Dota 2, a massive online strategy game. Strictly for the initiated.

Anything can be made to look exciting if the elements are all in the right place and you surely get swept up in this drama.
It hits all the right notes; drama, the human stories, stakes etc etc.
It is a free doc that can be watched online on YouTube and is well worth watching whether or not you are interested in video games.

This doc was released in mid March 2014 and according to the developer, Valve, it had been watched by over 5.5 million people during the film’s opening weekend.

Pretty cool.
An hour and 15 minutes that dives into a world you probably have no clue about.
That’s gotta be interesting, right?
You can watch the whole movie below. Enjoy.