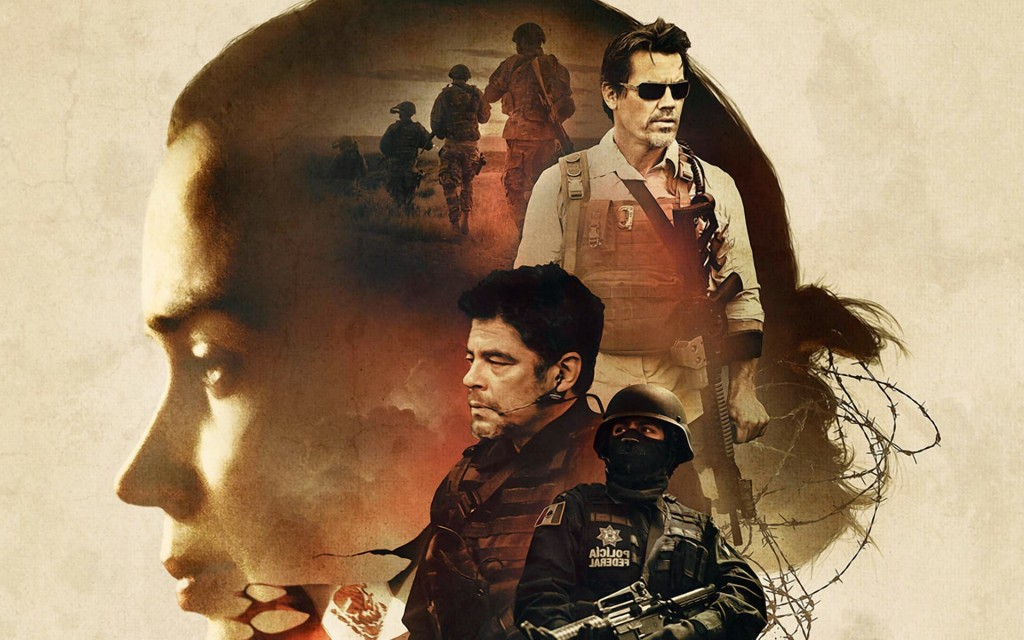 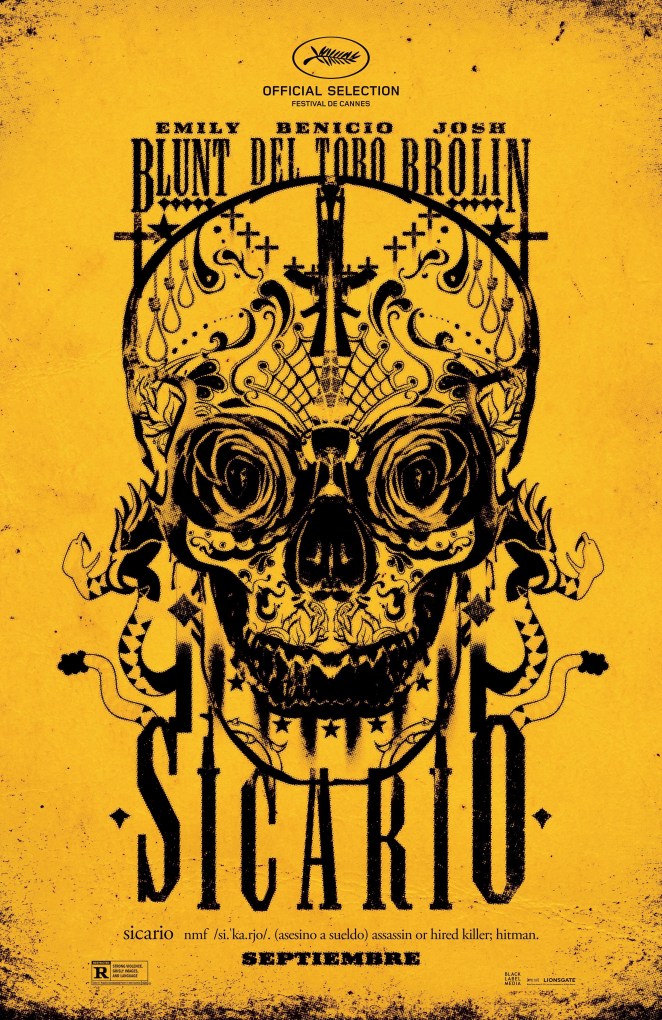 An F.B.I. agent is recruited to join a government task force set up to fight the war on drugs in Juarez, Mexico and at the Mexican/U.S. border. A Sicario is a hired assassin.

When Nixon began the official ‘War on Drugs’ in the 1960’s, one would hope that he wasn’t aware of the true cost of this phony war. Hundreds of thousands have died because of it and the death toll doesn’t seem to be abating.

Denis Villeneuve follows his excellent Enemy with this film about the horrific consequences of fighting in such an unwinnable war. As long as these drugs are outlawed by America and the rest of the world the killing will continue. A serious dialogue needs to happen. The war is clearly not working; fifty years on and no sign of any end in sight.
He gives us a tale that eschews deep character development in favour of the bigger picture, but don’t be fooled, this technique works brilliantly by allowing the viewer to be drawn into this crazy, lawless world.

Emily Blunt plays Kate Macer, an F.B.I. special agent who is recruited by Josh Brolin’s Matt Graver, an agent who may not be who he initially appears to be and the great Benicio Tel Toro plays Alejandro, another member of the team whose story will be revealed in due course. Another Brit, Daniel Kaluuya plays Reggie Wayne, Macer’s F.B.I. partner and does a stellar job. Victor Garber is Dave Jennings, Macer’s boss and here, as usual he delivers a sturdy performance. And finally we have Jon Bernthal who, fortunately, is not featured massively. The long term readers of The Movie Musings will know how I feel about this actor, to précis, he acts too much, seems too aware of the camera and tics harder than a tic-tac-toe player on speed. Nuff said. Bernthal aside, everyone brings their A-game to a story that is both important and necessary. Sure, there have been many films about the Mexican Cartel already but if a story or a subject is worth investigating it’s probably worth telling again. Having just watched Narcos on Netflix this subject matter was interesting to me and Villeneuve gives us a different take on it. Here, he also spends time with the victims of this crazy war and seems much more sympathetic to their plight than the usual Hollywood pro-American stance.

Emily Blunt’s character is basically representing the audience in this piece; she gets to know what’s happening when we do, which makes this all the more exciting for the viewer. She plays a by-the-book agent and when thrust into this chaotic, unpredictable world she finds her morals and ideals compromised, as there really are no black and white solutions in this world. Grey areas are much more thought-provoking than tying things all up in a neat little bow.

Jóhann Jóhannsson delivers a killer soundtrack that is all atmosphere and greatly adds to the unsettling nature of the film.

On the subject of his score he says:
“I wanted to create music that had an underlying tension and a sense of coming from below the earth, like a throbbing pulse that resonates from underground or the pounding heartbeat of a wild beast that is charging at you. I also wanted to evoke the sadness and melancholy of the border, the border fences and the tragedy of the drug war.”

He succeeds massively creating this dark, brooding score that helps embed us, as onlookers, in the story, helped along by the screenwriting duties of actor, Taylor Sheridan.

I highly recommend this intelligent take on the effects of the war on drugs in America. Villeneuve is a director of weight and substance and as he has signed up to direct the new Blade Runner project, it may be worth a look.

BUY THE SOUNDTRACK ON iTUNES HERE 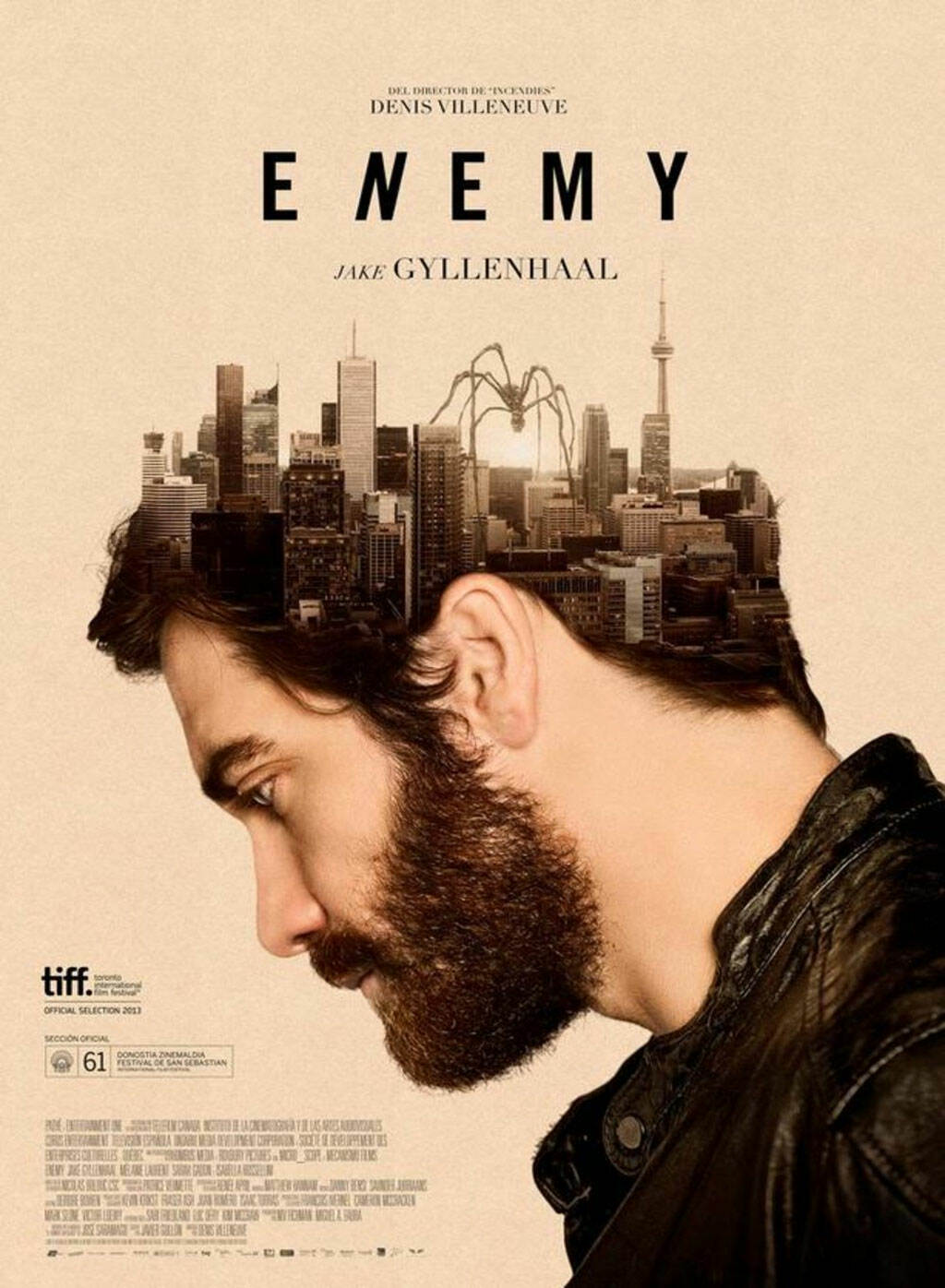 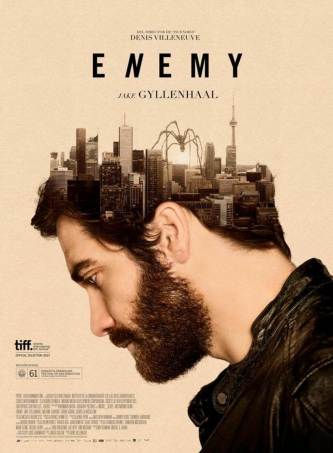 “Chaos is order yet undeciphered”

Doppelganger – ‘a ghostly double or counterpart of living person’

Denis Villeneuve evokes Hitchcock, Haneke, a splash of Noe and a pinch of Lynch in this strange, disturbing, mysterious and Kafkaesque thriller.

Jake Gyllenhaal plays a school teacher, Adam, who discovers there is an actor who looks just like him, he then proceeds to seek out this double and the puzzle begins.

This is truly an unsettling film and will, without a doubt leave you scratching your head. This is what art is capable of, begging questions of its viewers. It is much more intriguing and satisfying than having everything tied up in a neat little compartmentalised bow. The colours and music help to unsettle the audience. Cinematography by Nicolas Bolduc and the music is by Danny Bensi and Saunder Jurriaans.

What is real? What is imagined? What is going on? What is it saying? There are many theories and apparently Villeneuve has kept quiet, apart from saying “If you look at Enemy again, you’ll see that everything has an answer and a meaning.”

Based on Jose Saramago’s novel, The Double (the quote at the top of this review and the beginning of the film is taken from it), this has got to be one of the most powerful films I have seen this year, this was eminently more enjoyable than Villeneuve’s last foray, Prisoners. The screenplay by Javier Gulon is tautly written juxtaposing the looser pace of the film. Jake Gyllenhaal is excellent, yet again playing the teacher and the actor. Melanie Laurent and Sarah Gadon are brilliant as the women in the two Jakes’ lives. Special mention goes to Gadon for expertly portraying a complex role with absolute conviction.

People will either love this or hate it, the haters will be the ones that want everything packaged up the way Weinstein wants to give it to you but for this viewer it is exactly what the doctor ordered.

The less said plot wise, the better, the trailer is below but avoid if you want a movie experience unclouded by various images from the film.

Just watch the film, you may be able to unlock the puzzle.