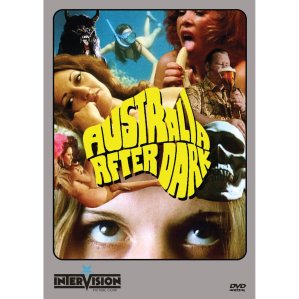 Following on from the recent viewing of Not Quite Hollywood, this documentary amusingly masquerades itself as a serious insight into the darker side of Australia, predominantly King’s Cross in the seventies, whilst at the same time unashamedly including the requisite exploitative shots of female nudity.

Narrated by Hayes Gordon and directed by John D Lamond with tones shifting from reportage to sexist tongue in cheek, this is a true oddity.

Creating an occult ceremony and passing it off as documentary takes some balls and clearly the unregulated/un fact checked internet-free time allowed these films to be made and passed off as factual. The bare faced cheek of it. We also get to see inside an S&M club, a bra fitting shop where women seem happy to be fitted by the male shop owner, a naked woman swimming in the Great Barrier Reef, a visit to the world’s longest bar, a body painting studio amongst other curiosities.

The prolonged scene where a male artist paints 3 naked women, as in his brush lingers over their skin with all the artistic skill of a pre-schooler, is totally unnecessary.
This is pure exploitation in a seventies, half-misogynistic style.

The inclusion of Count Copernicus is the highlight, this eccentric performer from the seventies, dressed in drag surrounded by women spouting his political protests, is strange yet entertaining. There are many unrelated scenes here that have little coherence but remain strangely fascinating.

A truly, strange documentary that is worth seeing for its sheer audacity at masquerading as a document on the life of the ‘darker’ side of Australia.