JOURNEY TO THE WEST: CONQUERING THE DEMONS ‘Xi you xiang mo pian’ (2013) 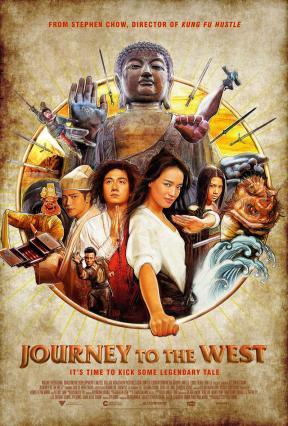 An origin story with a twist. Or a loose interpretation.

When I first heard about Stephen Chow’s Journey to the West I was immediately struck by the title.That’s Monkey, right? But when I saw the trailer I wasn’t sure. Yes, there was a fish demon in there but the whole thing looked very different.

The tag line on the poster is “It’s time to kick some legendary tale” and that’s what it does.

A demon hunter in the making goes to a village to protect it from demons and learns a lot about humanity, himself and the world around him.

Chow fills the world with his own unique slapstick style of comedy, ie Chaplin re-routed through Hong Kong and mainland China to arrive at the place his directorial style lives very comfortably now.

He is clearly influenced by film from all over the world; that was one of the big things that I noticed when I watched Kung Fu Hustle and then Shaolin Soccer. His style has an old school Hollywood feel to it but doesn’t for one second feel out of date.

Stephen Chow is a filmmaker who is daring to do things differently from either Hong Kong or mainland China and for that he will always get a nod from me but this film as fun as it is and entertaining as it is just slightly misses the mark of perfection. That’s not a bad aim, though.

The characters are all very interesting but the film seems to lose it a little in the binding. Bearing in mind the Chinese culture and their inimitable way of telling stories, maybe it’s not as palatable to a Western audience of the piece as a whole, does that make sense?

Certain scenes are a little drawn out and for the Chinese these may be perfection but for me, they lack a little subtlety. I am nit-picking here and don’t want to seem like I am down on this film, I enjoyed it, I just felt if a few elements were different I would have given it a higher rating and I think seeing the potential was why I found myself a little unsatisfied.

The whole Buddhist angle that permeates the film is wonderful.
The message-pretty much ‘be nice’ is an age old one that clearly needs to be told as that isn’t how people behave all the time.

Huang Bo was great as the Monkey King, playful and mischievous and Zhang Wen is a perfect replacement for Stephen Chow, who can now concentrate purely on directing.
Qi Shu  brings the love element to life in an unexpected way.

I am fascinated with the idea of the monkey mind and its capacity for destruction.  Another facet of the Hanuman factor and the potential for calming this mind and then what can be achieved, these all share tropes with Wu Cheng‘en’s literary classic.
The end hints at the possibility of a series and that would be great.

Until then I’ll go back to the book to be taken on the magical Journey to the West.